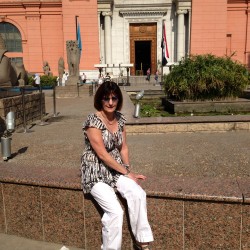 It was originally built and I would suggest it is probably one of the most visited museums in the world due to the nature of it’s exhibits. Today it is still a honeypot for tourists visiting the City however it’s interior has seen better days and the whole museum needs to move into the 21st century. END_OF_DOCUMENT_TOKEN_TO_BE_REPLACED

A few years ago, on one of our visits to Cairo, when we were staying at the excellent Le Meridien Pyramids Hotel, virtually overlooking the Great Pyramid, we decide to take a full day excursion, visiting Memphis, Saqqara and The Great Pyramid.

We booked the trip via the hotel’s reception that evening and the next morning we were collected by our guide for the day in a small, air-conditioned and very comfortable mini-bus. 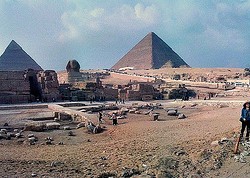 Our first stop, after an hour or so’s drive was the Memphis, Egypt’s first capital, and the Memphis Museum. We arrived quite early so there were very few other visitors around, as I imagine it must be like now. Amongst many other things we saw the colossal statue of Ramses the II, which apparently was the inspiration for Shelley’s poem, “Ozymandias“. The statue once stood 11metres high but now lies on his back with his feet missing. Even on his back you can still get an impression of just how awe inspiring the statue must have looked. And, as always in Egypt, you wonder how on earth they made and elevated these amazing structures. END_OF_DOCUMENT_TOKEN_TO_BE_REPLACED

A 3,500 year old broken tooth, found in a box in a burial chamber has helped solve on of Egyptology’s great mysteries.

Â  According to a recent article in the Travel Weekly magazine, a CT scan revealed that the tooth would fit exactly into the mouth of a previously unidentified mummy, now known to be the only female pharaoh from the Golden Age, Hatshepsut.

That means that not only can visitors now come face to face with her in the Mummy Room at Cairo’s Egyptian Museum but also that experts have changed their view on this indomitable queen’s relationship with her stepson and the manner of her death.

So, even now, new discoveries are happening all the time and new sites are being excavated and opened to the public. Which means that it really is a great time to take a Nile cruise and visit Cairo.

Following the instability following the 2011 revolution things have been quieter under President El-Sisi and tourists are returning in larger numbers each month. In September visitor numbers were up 193%.

END_OF_DOCUMENT_TOKEN_TO_BE_REPLACED

Late last week we were advised that the Foreign and Commonwealth Office (the FCO) had removed their advice against all but essential travel to Luxor which meant that Nile cruises were able to resume from the 2nd of December. 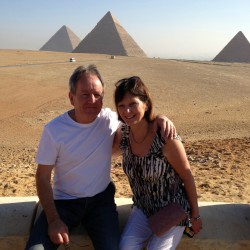 Well yesterday we were notified that the FCO no longer advise against all but essential travel to Cairo Governate and Greater Cairo including Giza 6th October City and the Giza Pyramids (which are part of the Giza Governate).

So that means UK travellers can once again visit Cairo to experience visiting one of the last remaining Wonders of The World as well as the many, many other unforgettable experiences that a visit to Cairo includes.

As I’ve mentioned on our Nile Cruises 4u Facebook page we were actually in Egypt visiting Cairo, Luxor and Aswan this time last year and it was one of our most unforgettable visits to that wonderful country. We had the time of our lives in Cairo being guided by our friend Medo and I can really recommend that if you get the chance you should go there.

And now, thanks to the lifting of the FCO restrictions, you can.

Our Last Day in Cairo 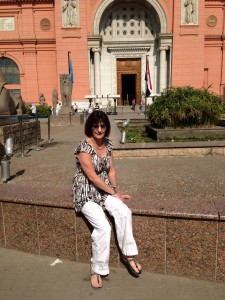 Firstly let me apologise for the break in my blogging.

Over Christmas Barbara and I took the family to…(where else?)…Egypt to ensure that we enjoyed some guaranteed warm sun shine without having to travel all the way to the Caribbean. We were not disappointed and enjoyed a fabulous week at the excellent Makadi Princess in Makadi Bay. But I’ll tell you more about our trip and the hotel over the coming week.

Today I’d like to describe our last day in Cairo following on to my previous posts.

As you will have read we visited the Conrad Hotel for lunch and to have a look around after which we returned to our base hotel, the Movenpick Pyramids. END_OF_DOCUMENT_TOKEN_TO_BE_REPLACED