After our wonderful lunch and cruise on board the superb MS Misr Nile cruise ship we took the water-taxi back to our hotel, the Movenpick Aswan as we had been invited to watch the sun go down over the Nile from the Panorama Bar which is located at the top of the tower at the Movenpick.

We took the opportunity to take a stroll around the grounds of the Movenpick and walked over to the other side of the island and the hotel which overlooks Kitchener’s Island. END_OF_DOCUMENT_TOKEN_TO_BE_REPLACED 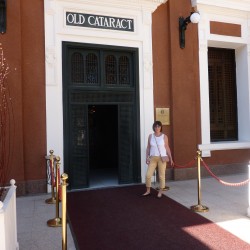 After our evening stroll and “people-watching” at the pavement cafe and a really good night’s sleep our second day in Aswan began with an excellent breakfast at the Movenpick Aswan Hotel. Once I’ve a had a good cup of real coffee I’m setup for the day. Which is just as well as we had a busy day planned. 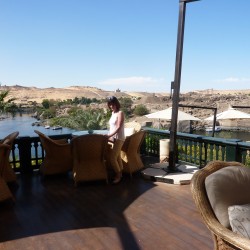 Firstly we were lucky enough to be invited to visit the recently re-opened and world-famous “Old Cataract Hotel“. We had visited the hotel prior to its’ complete refurbishment that took over two years to complete and we were looking forward to seeing what had been done to improve this marvelous hotel that blends old-world Victorian grandeur with Egyptian charm. END_OF_DOCUMENT_TOKEN_TO_BE_REPLACED

Because we’d been so busy it was hard to believe that we were only on Day 3 of our visit to Egypt.

Days one and two were in Luxor and now we were down in the beautiful city of Aswan staying at the uniquely located Movenpick Aswan Hotel.

One thing that was immediately noticeable was that it felt even warmer than Luxor. It was mid November and we were enjoying day time temperatures of around 28-29 degrees!. It was hot! Fantastic.

In fact it was lovely in the evenings too. Certainly warm enough to just be sitting at pavement cafes in just a t-shirt and light cardigan. Not something we’re used to in the UK even in the summer and here it was November. Just 5 hours away from the UK and the weather could not have been more different.

We were greeted warmly by the friendly management and staff at the Movenpick Aswan Hotel after taking the water-taxi to reach the hotel. Our bags were boarded onto the boat and we didnt’ see them until we reached our rooms. END_OF_DOCUMENT_TOKEN_TO_BE_REPLACED

After our stomach-busting lunch at the wonderful Lebanese restaurant at the Steigenberger Nile Palace we were then invited to have a look at some of the hotel’s rooms and facilities, which I have to say were very impressive. The standard twin rooms are very good but if you request the rooms with Nile views, for a small extra charge, then I think you’ll have the perfect base for your stay in Luxor. 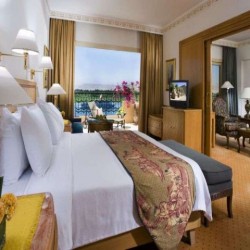 Even more impressive are the standard suites that can accommodate 2 adults or 2 adults and 2 children. Having a main bedroom and a lounge, the children can be accommodated by using the large double sofa as a bed. Superior rooms have large terraces and wonderful panoramas of the Nile.

The hotel boasts several restaurants including Nubian, Lebanese and Italian which will give guests the opportunity to eat in different surroundings each night. With 2 outdoor swimming pools and excellent gym facilities and tennis courts the Steigenberger is an excellent hotel if your based in Luxor after your Nile cruise.

After our visit to the Steigenberger Nile Palace we took the opportunity to return to the Maritim Jolie Ville to re-charge our batteries as we were booked to see the Sound and Light Show at Karnak Temple that evening.

Sure enough, after what seemed the briefest time trying to catch 40 winks at the Jolie Ville it was time to catch our mini-bus transfer to Karnak Temple to enjoy the famous Sound and Light Show.

To reach Karnak Temple from the Jolie Ville entails travelling from one side of Luxor to the other. Not a long journey, maybe 20 minutes or so, and it was interesting to see Luxor at night and to drive along the Corniche as the residents took the opportunity to take an evening stroll in the warm atmosphere that Luxor enjoys almost year round.

On arrival at Karnak Temple it was clear from the number of coaches in the car park that there are still an awful lot of people visiting Egypt, and especially the Nile, from all over the world and we could hear all sorts of different languages being spoken as well as hearing lots of American, Australian, Canadian and South African accents.

Barbara and I have been to the Sound & Light Show at The Pyramids and that is really impressive and not to be missed so we were expecting much of the same. However the Sound and Light Show at Karnak is very different. It starts right amongst the Temple itself and the audience walks to various spots in the Temple ruins and the sound and light performances take place in and around the audience. As you can imagine the effect of the booming voices of the narrators as well as the atmospheric lighting create spine-tingling effects. 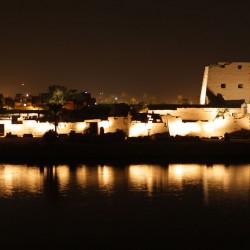 Each time a narration ends you are signaled to move deeper into the Temple’s ruins to see and hear more of the story of the Temple and of Ancient Egypt. Eventually you reach the “Sacred Lake” where you are invited to take seats facing the lake and the finale of the presentation takes place as you look to the far end of the lake which looks over Luxor city, the Nile and across the river to The Valley of The Kings. It was a magical experience.

Barbara and I would highly recommend it but I would emphasise that the ground underfoot throughout the presentation is very uneven and definitely not suited to those in wheelchairs or for anyone unsure of their footing. There were people in wheelchairs at the beginning of the show but they soon found it impossible to go forward after the initial narration and even those with walking difficulties were really struggling towards the end and were missing out on the experience as they were so far behind the narration by the time they had caught up.

I can only imagine that those people asked if the Sound and Light show was suitable for wheelchair users and those with walking difficulties and had been told that it was. I’m not sure if that was because those who were asked were trying to be helpful and encouraging or if they were merely trying to sell tickets but I can state categorically that it is not suitable and if you are told otherwise then I would ignore that advice.

After our Karnak Temple experience we travelled over to the excellent 5 Star Sonesta St. George Hotel where we had been invited to have dinner and have a look around the hotel by the management but I’ll save that until tomorrows’ post. 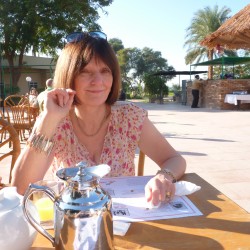 After a breakfast on the edge of the Nile at the Maritim Jolie Ville and our visit to The Valley of The Kings, described in my post yesterday, we headed into Luxor to visit a number of Nile cruise ships and hotels that we have sent clients to over the years and also to see a few properties that we haven’t’ used before.

Falling into that category was the Nile cruise ship, The Admiral, which is part of the Presidential fleet of ships. 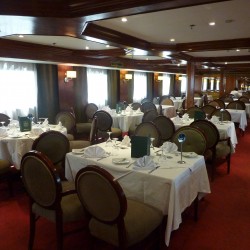 It’s a 4 Star Nile cruise ship that offers an All Inclusive option and sails for a 7 night cruise from Luxor on a Monday. I have to be honest I wasn’t’ really impressed with the ships itself which is a little tired-looking and it’s furniture and fittings really showed that it is a 4 star ship. The cabins were very basic and if passengers are used to 5 star hotel standards I think they would be very disappointed with the levels of comfort and decoration.

However, saying that the crew were very welcoming and we did return that evening at the invitation of the owners to enjoy a lovely dinner in the restaurant. The other people who were in the restaurant and sailing on The Admiral seemed very content with their choice and so I imagine that if you are on a limited budget then it would look like a good choice. If you are looking for something more luxurious I don’t’ think the Presidential boats are the ones for you.

On leaving The Admiral we made our way to see the first of the Luxor hotels that we use regularly for those clients seeking a Nile cruise and stay holiday. In this case it was the Sofitel Karnak, just opposite the world-famous Karnak Temple.

We have visited the Sofitel Karnak before but it’s in such lovely location, right on the banks of the Nile with beautifully kept gardens, that’s its’ a pleasure to visit once again. The hotel is a “low-rise” hotel with no buildings seemingly over two stories which makes for a nice atmosphere. There are excellent facilities for both families and couples and the hotel is the only “All Inclusive” hotel in Luxor.

It would certainly provide a great chance to chill-out and relax after a Nile cruise with no transfer time to speak of as the hotel is just on the outskirts of Luxor.

The hotel provides a twice daily shuttle bus into Luxor’s town centre but it also, more appealingly, offers a water taxi to its’ guests that takes you right into the heart of Luxor sailing along the banks of the Nile. A lovely touch. END_OF_DOCUMENT_TOKEN_TO_BE_REPLACED