After a quick, but tasty, breakfast at the Movenpick Pyramids Hotel, it was off straight away to visit the Pyramids and The Sphinx. We have done this before but how can you not be excited about revisiting one of the remaining Wonders of the World?

As it was a Saturday there were lots of Egyptian school children. You forget when you are a visitor to Egypt that many of their citizens will not have visited the Pyramids for various reasons but school children particularly look forward to their first visit to one of their country’s most important heritage sites. As they were on school-trips it was obvious that their teachers had told them all about the trip and what to expect. Including the fact that they would see lots of visitors from overseas.

Well, there are still fewer overseas visitors than would have been there prior to the Revolution, so we found ourselves quite the focus of the schoolchildren’s excitement and found that we were being photographed for school projects as much as they were photographing the Pyramids!

Last time we visited Barbara actually entered the Great Pyramid and followed the corridor down to the burial chamber but, having done it before, she decided against it on this occasion. However we both climbed up to the entrance to the Great Pyramid so we could photograph each other.

Sad eh? Here’s the results of our efforts:

I also took the opportunity whilst I was a little way up the side of the Great Pyramid to use the “Panoramic Shot” facility on my new iPhone5 to take this panorama looking down from the Great Pyramid over the grounds of the complex and over Giza and in the distance. If you click on it I think it should open up so you hopefully can see it better:

I also took this strange shot (!) from the bottom of the Great Pyramid trying to show how massive it is in real life. Hopefully you can get an idea of how vast it is when you realise that this is just at the bottom: 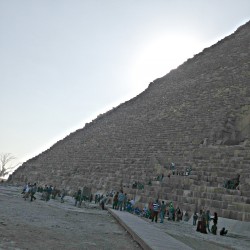 One of the most popular trips that we organise and sell is a one week Nile cruise followed by three nights in Cairo which then gives you the chance to visit the Pyramids on one day and then visit the Egyptian Museum and downtown Cairo on the other full day. If you have the time I would really recommend this arrangement as it means you will have a total Egyptian experience that you’ll never forget. A Nile cruise and then a wonderful time up in Cairo.

After we’d spent enough time taking in the enormity of the task that the Ancient Egyptian builders faced when building the Pyramids our driver and guide took us to a further vantage point where you can look at the Pyramids from a distance and take in the wonder of it all. I took some more photographs using my iPhone5 and couldn’t’ resist the one that shows Barbara trying to touch the top of the Pyramids. Silly I know but everyone was doing it! 🙂

After spending some time taking in the amazing 360 degree views of this magical place we boarded our mini-bus as we were off to visit Tahir Square and the Egyptian Museum which we’d really been looking forward to.

But…more about that tomorrow.