In an news article in The Guardian yesterday it was announced that archaeologists have unveiled a restored statue of Amenhotep III which toppled in an earthquake more than 3000 years ago at Egypt’s “temple city”…Luxor. 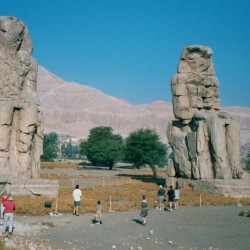 Barbara and I have visited the site on several occasions and apparently the statue has been erected at the northern gate of the king’s funerary temple, which already has twin statues of a seated Amenhotep III, known ans the Colossi of Memnon.

The article goes on to say that the 12.9 metre (43ft) statue of the pharaoh, whose reign archaeologists say marked the political and cultural zenith of ancient Egyptian civilisation, and who died about 1,354BC, was unveiled yesterday and stands west of an additional effigy of him erected this March.

Amenhotep III inherited an empire that stretched from the Euphrates to Sudan. The restored statue, showing him striding, wearing the white crown of Upper Egypt and holding a papyrus roll in each hand, weighs 10 tonnes.

You will be able to see the new statue as part of your Nile cruise itinerary when you visit the Valley Of The Kings.